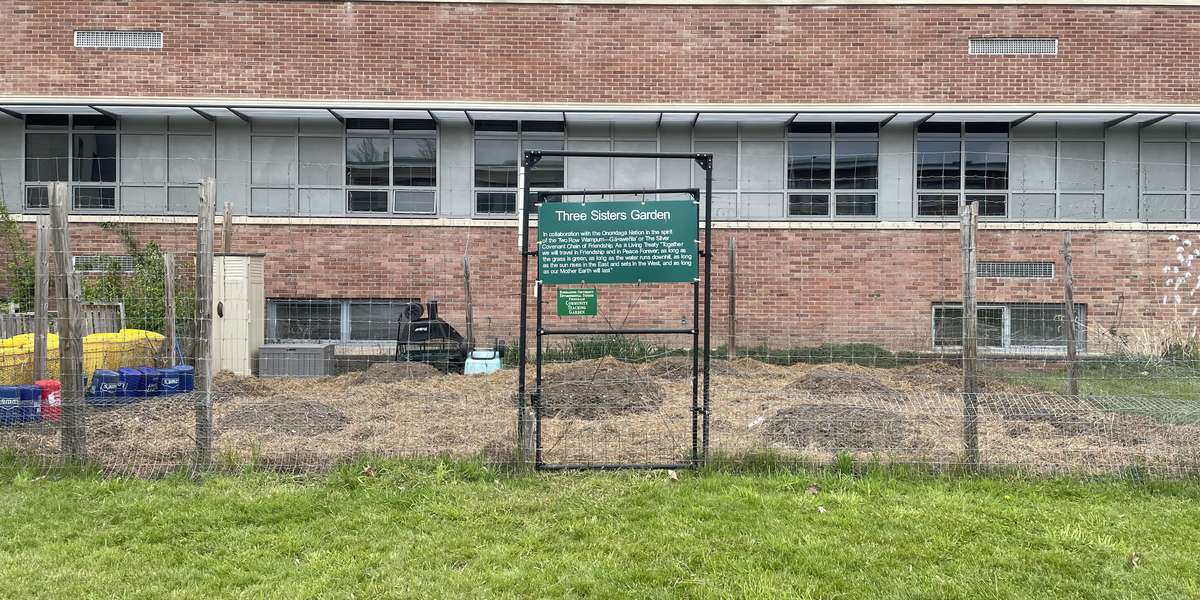 The Three Sisters Garden is located in The Science 1 courtyard on Binghamton University’s main campus. This garden was planted in May of 2022 in collaboration with the Onondaga Nation, the fire keepers of the Haudenosaunee, and in the spirit of the Two Row Wampum—Gä•sweñta’ or The Silver Covenant Chain of Friendship. Sacred varieties of Indigenous seeds were planted by Angela Ferguson (Onondaga Nation Farm), Sarah Patterson (Onondaga Nation Farm), Tony Gonyea (Faith Keeper, Onondaga Nation), Ethan Tyo (Akwesasne Mohawk), and faculty, administrators, and students from Binghamton University. In the Fall, Angela Ferguson and her farm team will return to campus, help us harvest the garden, and prepare the bounty in a traditional Haudenosaunee manner for a feast that we will share in early October. Details of the harvest will be announced in the fall. This garden part of the curriculum of several classes in Environmental Studies, Sustainable Communities, Anthropology, and History.

The Three Sisters are part of the Haudenosaunee creation story where the grandchildren of Sky Woman, whose fall from the heavens precipitated the creation of Turtle Island. Sky Woman’s daughter perished while giving birth to twins, and the grieving ancestress covered her body with an earthen mound. In one retelling of this creation story by Sarah Patterson to Binghamton University faculty and students, she recounted that strawberries grew from Sky Woman’s daughter’s heart, wild potatoes from her feet, tobacco from her head and corn, beans and squash from her body.

As the garden grows you will notice the corn stalks make a natural trellis for the beans to meander up. At the base of the corn and beans, the squash will fan out low to the ground, encircling the mounds with their large and spiny leaves. The large leaves of the squash will shade out competing weeds and the spiny leaves will keep away predators. What you won’t see with the naked eye is that he corn and squash will extract nitrogen from the soil and the beans will help replenish that nitrogen for future generations of Three Sisters. Grown together on mounds, the Three Sisters are a biological complement to one another.

By uploading photos of the Three Sisters Garden to the Chronolog Program, you are contributing to documenting the communal, cultural, and ecological significance of this garden. Thank you!

If you have any questions, do not hesitate to reach out to BU garden organizers BrieAnna Langlie, Department of Anthropology and Barry Brenton, Center for Civic Engagement:  langlie@binghamton.edu or bbrenton@binghamton.edu