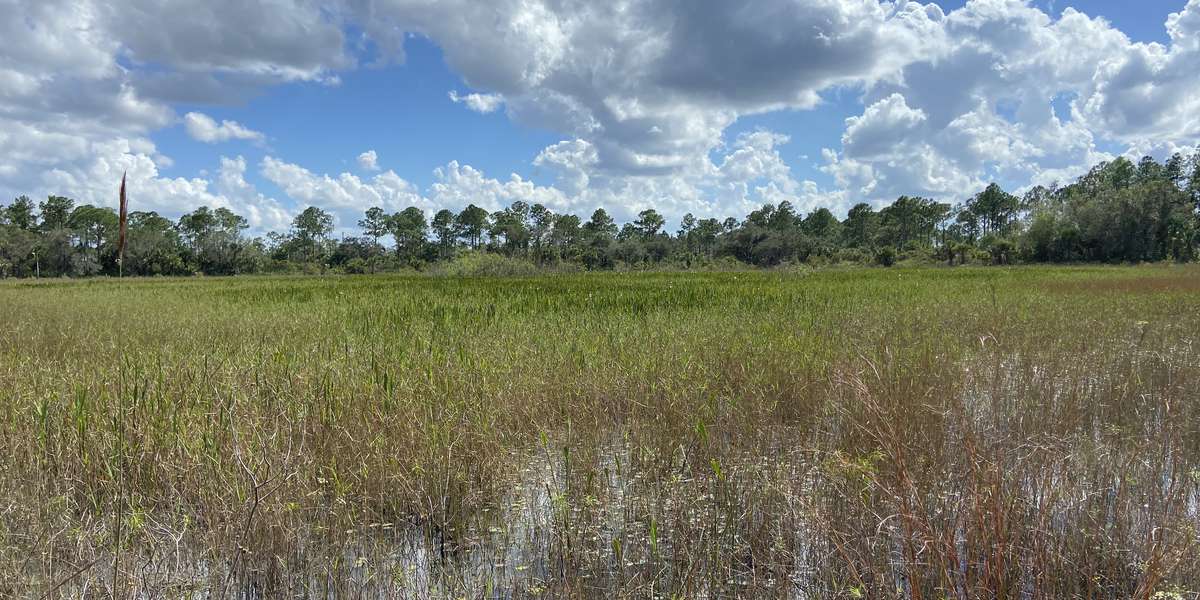 On your way here from the trailhead, you passed through a region of Pine Flatwoods, a relatively flat ecosystem dominated by southern slash pines and sabal palms (Sabal palmetto) with an undergrowth of saw palmetto (Serenoa repens), gallberry (Ilex glabra), wax myrtle (Myrica cerifera) and mixed grasses. Pine Flatwoods are often found dotted with small, circular marshes like the one in front of you. From the air, they can sometimes look like old bomb craters, but in fact, they’re actually “depression marshes,” sometimes called “flatwoods marshes” or “seasonal ponds.”

These marshes tend to form in sandy soils when water erosion causes the underlying limestone to slowly dissolve, allowing the overlying surface to collapse into dimple-like depressions. They become inundated during the wet season as the water table becomes sufficiently saturated and water runoff from higher elevation collects here. Once the marsh in front of you becomes full, excess water will flow out over the edges opposite us and spread across the land into a much larger marsh further to the south.

You might notice how slash pine and saw palmetto tend to ring the higher and drier outer edges of this marsh. As your attention shifts closer towards the center, you’ll see different types of vegetation become more prominent. Although depression marshes are usually rather shallow (often < 1 meter), they tend be shallowest around the outer edges and deepest in the middle. As a result, there may be concentric bands or zones with slightly different hydroperiods and thus different kinds of vegetation. The center, which, usually gets inundated first and holds water longest is where you’ll likely find saw grass (Cladium mariscus), pickerelweed (Pontederia cordata) and duck potato (Sagittaria lancifolia), while further out from the center maidencane (Panicum hemitomon) and St. John’s-wort (Hypericum perforatum) may be more prominent.

Depression marshes like this one are important breeding habitats for amphibians like frogs and newts because here they’re isolated from larger species of fish that prey on eggs and tadpoles. Nevertheless, these marshes are also important feeding grounds for wading birds like egrets and herons. When the dry season approaches, these marshes get more and more shallow until the only water remaining are small pools teeming with amphibians, crayfish, mollusks, and insects, providing a veritable buffet for many bird species, as well as reptiles like the banded water snake (Nerodia fasciata).

Without periodic fires and seasonal inundation, this marsh would inevitably shift away from largely herbaceous vegetation and become increasingly dominated by woody shrubs and trees like coastal plain willow (Salix caroliniana), common buttonbush (Cephalanthus occidentalis), groundsel tree (Baccharis halimifolia), and wax myrtle (Myrica cerifera). These changes would negatively impact the habitats of many interdependent species. New species would eventually move in while those who had depended on this marsh for breeding and feeding would be forced to move on to wetter habitats.

Your photo contributions will help land managers, scientists and students better understand the hydroperiods of this marsh and the diversity of flora and fauna found here.

NOTE: CREW’s boardwalks and the observation platform on which you’re standing were constructed from ipê (Tabebuia serratifolia) wood, also known by the trade name Pao Lope.  It is extremely hard, rot resistant, and fire resistant, enabling it to withstand the harsh climate of south Florida. Further, it is not chemically treated, protecting the water resources of the watershed from toxins that could leach out of chemically treated lumber.

Important concepts: A “hydroperiod” refers to the length of time each year that a wetland has standing water.