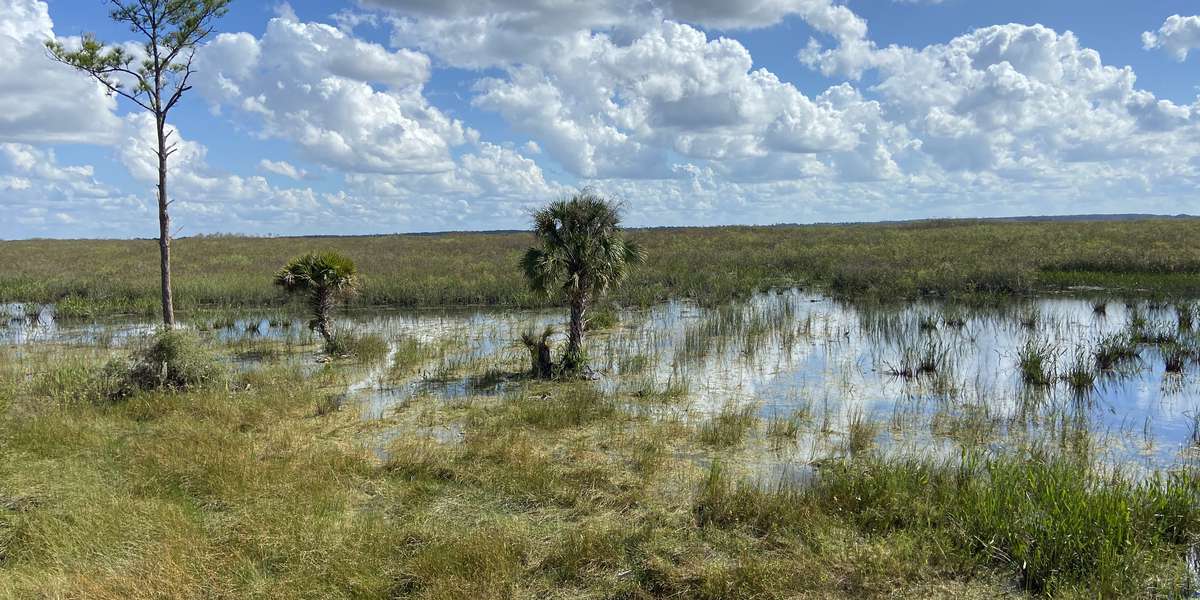 From this tower you can look out over the 5,000-acre sawgrass marsh that is the headwaters of the Imperial River. To the left is Immokalee, straight ahead is Audubon’s Corkscrew Swamp Sanctuary and Naples, and to the right is Bonita Springs. To the far right are Estero and the campus of Florida Gulf Coast University. This relatively large marsh collects runoff until it overflows, spilling excess water as sheet flow that will eventually meander further south towards the western Everglades and southwest towards Estero Bay.

First, marshes like this one store lots and lots of water during the wet season. This is an important contribution towards flood protection for surrounding communities. On average, Southwest Florida receives 54 inches of rain per year, much of it falling from May to October. Some storms can drop several inches of rain in a matter of hours and marshes like this one provide places where vast amounts of water can accumulate. During Hurricane Irma in 2017, the lower deck just below you became entirely submerged with water backing up over the trails that brought you here.

Imagine if this marsh was filled in and paved over for housing or retail development. Where would all the water that typically ends up here go during and after storms? Without wetlands like this one to store runoff, much of that water would quickly flow south and southwest into the canals and rivers that pass through the neighborhoods of Bonita Springs, North Naples, Golden Gate, and Ave Maria. These communities would then face an increased risk of flooding if those waterways received more water than they could hold.

Second, wetlands act as nature’s kidneys. Vegetation and the soils through and over which surface and groundwater moves help clean debris, pollutants, and excess nutrients from water, purifying it along the way. This natural filtration helps ensure that water flowing into CREW from adjacent roadways and from agricultural, industrial, retail, and residential areas is cleaned before it flows further to the south and southwest. Without the filtration these wetlands provide, immense quantities of contaminated water and sediments could eventually end up negatively impacting the fragile ecosystems of Estero Bay, the Western Everglades, and the Ten Thousand Islands.

Third, wetlands like these also help recharge our groundwater aquifers. CREW lands sit atop Florida’s multi-layered aquifer system. These aquifers, including those right below us, are made up of layers of sand and porous limestone that can hold vast amounts of fresh groundwater in nooks and crevices of various sizes. Some of the water that collects in wetlands like those around you will eventually percolate down through the soil, filling up those underground reservoirs far beneath our feet. When we need water, we drill down into those aquifers and pump fresh groundwater back to the surface. In fact, this ground water is the primary source for most of SWFL’s household and agricultural water needs, but if we pull too much out of these aquifers without allowing them to recharge, they can become brackish from saltwater intrusion or simply run out. The more rain that falls on roads and parking lots or that is quickly diverted away from wetlands like these via ditches and canals, the less water there will be to recharge those aquifers.

Your photo contributions will help land managers, scientists and students better understand the hydroperiods of this marsh and the flora and fauna found here.

Important concepts: A “hydroperiod” refers to the length of time each year that a wetland has standing water.

NOTE: CREW’s boardwalks and the observation platform on which you’re standing were constructed from ipe (Tabebuia serratifolia) wood, also known by the trade name Pao Lope.  It is extremely hard, rot resistant, and fire resistant, enabling it to withstand the harsh climate of south Florida. Further, because this wood doesn’t need to be chemically treated, it’s a better alternative for protecting the water resources of the watershed than chemically treated lumber, which can leech toxins into the surrounding environment.