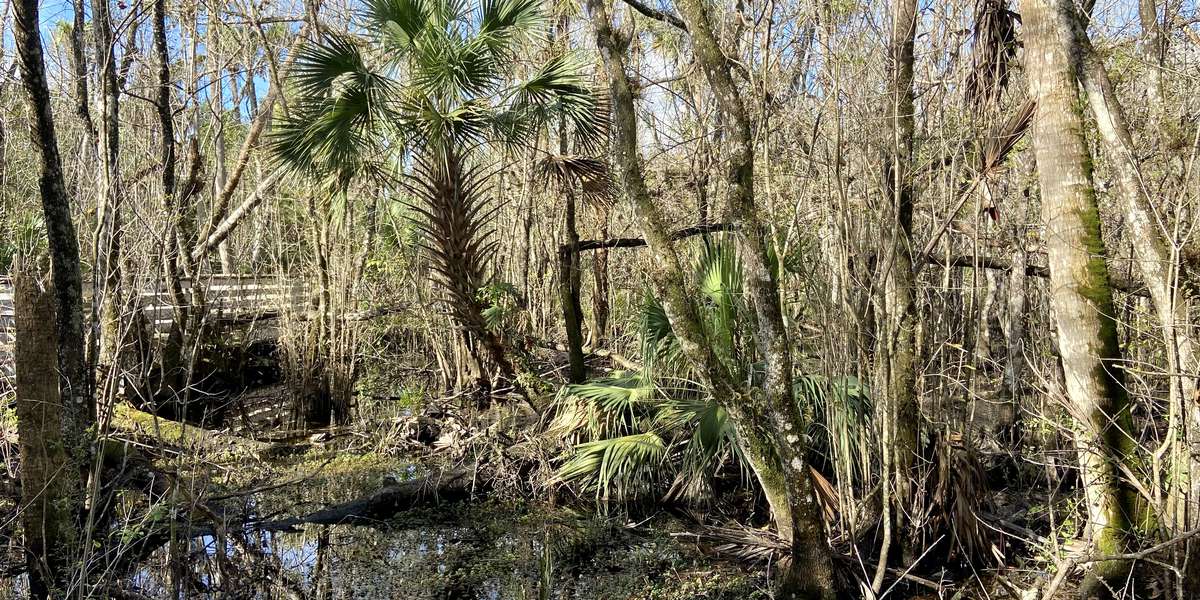 The dominant vegetation in marshes are grasses and sedges, but swamps, which are forested wetlands, are defined by their trees, such as bald cypress (Taxodium distichum), red maple (Acer rubrum), pond apple (Annona glabra), and pop ash (Fraxinus caroliniana), which you see here on both sides of the boardwalk.

This is a particular kind of swamp called a slough (pronounced “slew”), a broad, shallow, and slow-moving river. This area might appear mostly dry during months when rain is scarce, but during the wet season, water levels in this slough might be as much as a meter deep. Although the water in this slough may appear still, almost stagnant, it’s moving, even if very slowly - sometimes just a mere hundred meters per day as it transports large amounts of water into the large seasonal marsh southeast of where you’re standing. When the slough is carrying water, it provides habitats for an abundance of fish species and aquatic invertebrates, providing a buffet for larger mammals and reptiles that prey on them.

The pop ash (Fraxinus caroliniana) is the dominant tree in this particular slough and gives it its name. This native species is found in the wet soils of swamps and floodplains throughout the southeastern United States. Individual trees can grow to more than 30 feet (>9 meters) in height and are often found with multiple crooked or canted trunks. During the wet season water flows slowly between the spreading bases of pop ash trees, which are wider at the bottom, giving them greater stability in the soft shifting soils and flowing swamp waters. Pop ash trees are also deciduous; that is, they lose their leaves in the dry season when the life-giving waters of the slough dry up. Depending on the time of year you visit, you may find an open canopy with an unobstructed view of the sky, or you may find a closed canopy with an abundance of shade.

You may also notice an abundance of different kinds of epiphytes attached to the trunks and limbs of trees around you. Epiphytes (or “air plants”), including the ferns and bromeliads , use their roots to cling to the bark of trees. These plants aren’t parasitic; rather, they’re simply using the real estate available on these trees to access moisture and nutrients by absorbing them directly from their environment using tiny hairs on their roots and leaves. Epiphytes are particularly fond of the humid air that accumulates in this slough when the canopy is at its most dense from May to October.

Among the many epiphytic plants you are likely to see here in the Pop Ash Slough are resurrection ferns (Pleopeltis polypodioides), which you’ll often find growing on the tops of tree branches.  During dry spells, these ferns curl up, turn brown, and appear dead, but with a little rain, they unfurl their fronds and once again turn bright green. It’s an adaptation that allows them to survive our dry season. Unlike ferns growing in soil, resurrection ferns cannot tap into groundwater; instead, they rely on rainwater than runs down tree branches or humidity in the air.

You’ll probably also see wild splotches of color on the trees and on boardwalk itself. These are lichen, a composite of fungi and either algae or bacteria. In this special relationship, the fungus, which is unable to produce its own food and cannot survive on its own, provides a surface for its alga/bacteria partner to reside. It’s a partnership that provides the latter real estate higher up in the air where it has better access to sunlight and water it needs for photosynthesis. In turn, the fungi feed themselves from the sugars produced by its food-producing partners. You’ll probably notice lichens come in all shapes and sizes; some are flat, others appear leafy, and some like tiny shrubs. They also come in riot of colors, including black, brown, white, gray, silver, yellow, green, red, and orange. How many can you see here?

Your photo contributions will help land managers, scientists and students better understand the hydroperiods of this slough and the diversity of flora and fauna found here.

NOTE: CREW’s boardwalks and the observation platform on which you’re standing were constructed from ipe (Tabebuia serratifolia) wood, also known by the trade name Pao Lope.  It is extremely hard, rot resistant, and fire resistant, enabling it to withstand the harsh climate of south Florida. Further, because this wood doesn’t need to be chemically treated, it’s a better alternative for protecting the water resources of the watershed than chemically treated lumber, which can leech toxins into the surrounding environment.