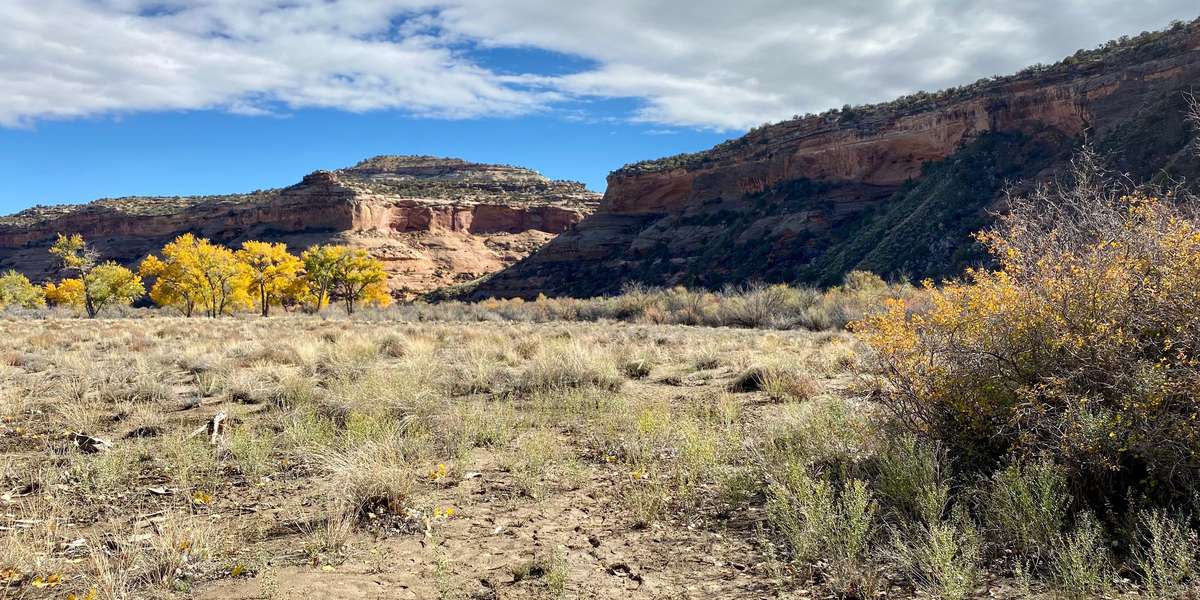 Within McInnis Canyons National Conservation Area you can find natural arches, sandstone canyons, alcoves, and a 24 mile stretch of the Colorado River corridor. Riparian areas are of great importance in desert landscapes and can provide important resources and refuge for plant and animal species that depend on riparian areas. River corridors can also provide a means for the spread of invasive plants, for example tamarisk (Tamarix ramosissma) and Russian knapweed (Acryptilon repens). These invasive species were introduced in this area and can disrupt native ecosystems. Russian knapweed can outcompete native plant species along the Colorado River, degrading riparian vegetation communities, which can have further negative effects on animal and insect communities. Because of this a biological control agent, the Russian knapweed gall wasp (Aulacidea acroptilonica), has been released in this area. This gall wasp targets Russian knapweed specifically and can reduce growth, flowering, and seed production of Russian knapweed. This can help reduce the competitive ability of Russian knapweed and slow the spread of this plant. This biological agent is part of an integrated management strategy to improve the overall ecosystem health of this riparian area. As part of a National Environmental Education Foundation Grant (https://www.neefusa.org) in partnership with Colorado Canyons Association and the Palisade Insectary, students from School District 51 are monitoring how the gall wasps are affecting Russian knapweed and how native vegetation is responding. Thanks for participating!

Located in the high desert canyon country of western Colorado and eastern Utah, McInnis Canyons National Conservation Area consists of approximately 123,739 acres of BLM-administered land near Grand Junction, Colorado. Originally known as Colorado Canyons National Conservation Area, this National Conservation Area (NCA) was established on October 24, 2000, and was renamed in honor of Representative Scott McInnis on January 1, 2005. Among its unique natural resources are the more than 75,000 acres of the Black Ridge Canyons Wilderness, which includes the second-largest concentration of natural arches in North America. Internationally important fossils have been uncovered during more than a century of excavation. Pictograph and petroglyph sites abound, and the Old Spanish Trail, once referred to as the “longest, crookedest, most arduous mule route in the history of America,” runs through the NCA. Today, the NCA is a recreation destination. Visitors are drawn from all over to the opportunities experience the world-class mountain biking and straightforward, scenic river rafting offered by the McInnis Canyons NCA. The NCA benefits from the attention of a vibrant network of people, from historic and current ranching families to the active Friends groups working to protect and support this special place. Traditional land uses such as grazing continue, guided by management to protect the values for which the NCA was established.