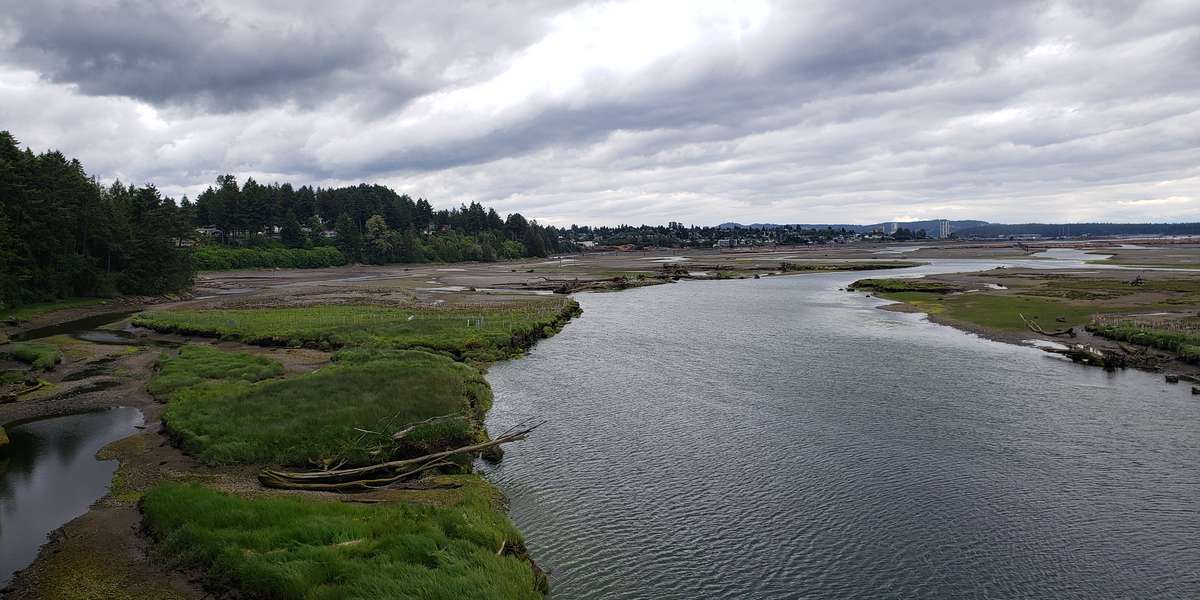 The Eco-Cultural Carex Bed Restoration of the Nanaimo Estuary project is an initiative by the Guardians of the Mid-Island Estuaries in partnership with Snuneymuxw First Nation, and the City of Nanaimo and funded through the Pacific Salmon Foundation, Habitat Conservation Trust Fund, British Columbia Conservation Foundation, Fisheries and Oceans Canada and the Nature’s Trust of BC. The goal of the project is to restore Lyngbei's Sedge (Carex lyngbyei) beds in the Nanaimo River Estuary. Lyngbei’s Sedge have a large network of rhizomes that help stabilize the banks of salt marsh platforms that provide key habitat for rearing young salmonids as they transition from the river to the ocean. A study from the 1970’s mapped out the Lyngbei’s Sedge beds throughout the Nanaimo River Estuary. When comparing the data from the study to the existing beds, it was evident that Lyngbei’s Sedge beds have been degraded and reduced over time as much as 90%. One of the leading reasons for the decrease in Lyngbei’s Sedge is due to overgrazing by Canada Geese (Branta canadensis). When eating Lyngbei’s Sedge Canada Geese will pull out the entire sedge including its rhizomes. This results in increased erosion of the salt marsh platforms by wave and tidal action and leads to a decrease in habitat for salmonids using the estuary. To restore balance, Geese ex-closures (fencing) were placed around beds of Lyngbei’s Sedge to prevent Geese from flying in and eating the sedge. When Geese are preparing to land, they look for open areas similar to an airplane run way, and they prefer open areas to watch for predators. The ex-closures create an unfavorable area for Geese to graze, and allow beds to recover. Furthermore, transplanting of Lyngbei’s Sedge from already established sites to impacted sites that were once areas of Lyngbei’s Sedge began in March 2021 to help restore severely impacted beds.

About City of Nanaimo

The City of Nanaimo is a community of 100,000 residents on the east coast of Vancouver Island, British Columbia. The City has over 1000 Ha of parkland. 70% of it being natural area. The spread of invasive species and the fragmentation of habitat over the years has negatively impacted these spaces. To address this, the City is working with Snuneymuxw First Nation and a variety of community organizations on several environmental restoration projects to increase the ecological diversity of our parks and natural areas.