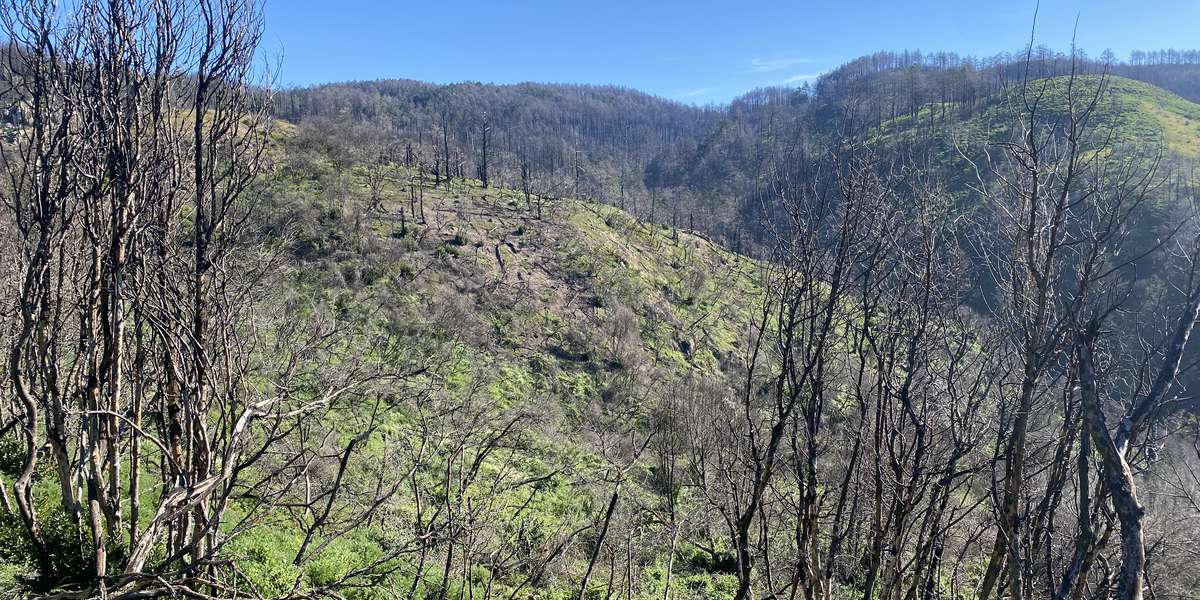 Wildland fires are often named after a landmark near its origin point. The Woodward Fire was named after the Woodward Valley, seen from this photo monitoring point, and not far from where the fire originated. While much of the Woodward Fire burned with low or moderate heat, there were several tracts such as this that did burn severely and will take longer to recover.

When a fire burns with high heat, it can burn the soil as well as the overlying vegetation. Scorched soil may become hydrophobic, forming a crust that  repels water, making it harder for new plants to root and more subject to erosion. Fires that burn with high heat don’t leave behind as much organic matter, and it will take longer for these areas to rebuild a nutrient rich soil that is ideal for new life.

Many factors lead to  a fire’s heat intensity on any given day, and several of those factors are visible at this location. This area had not burned in many years, meaning it had a lot of woody fuels ready for the fire to consume. Fires like to climb uphill, and the steepness of the slopes in the Woodward Valley made it very susceptible to a hot, fast moving fire. This same steepness and density of the brush also made it hard to access for firefighters. Additionally gusty winds, common in Point Reyes, helped breathe oxygen into the fire and made it spread faster during its first few days.

Since the vast majority of the Woodward Fire burned at a low severity, it stands in stark contrast to many of the destructive fires that have occurred across California in the last decade. Less frequent burns due to many years of fire suppression, and hotter, drier, longer summers driven by climate change, means that this trend will likely continue. Hopefully watching how this tract of land recovers over the next several years will help us understand how these ecosystems might be able to bounce back.