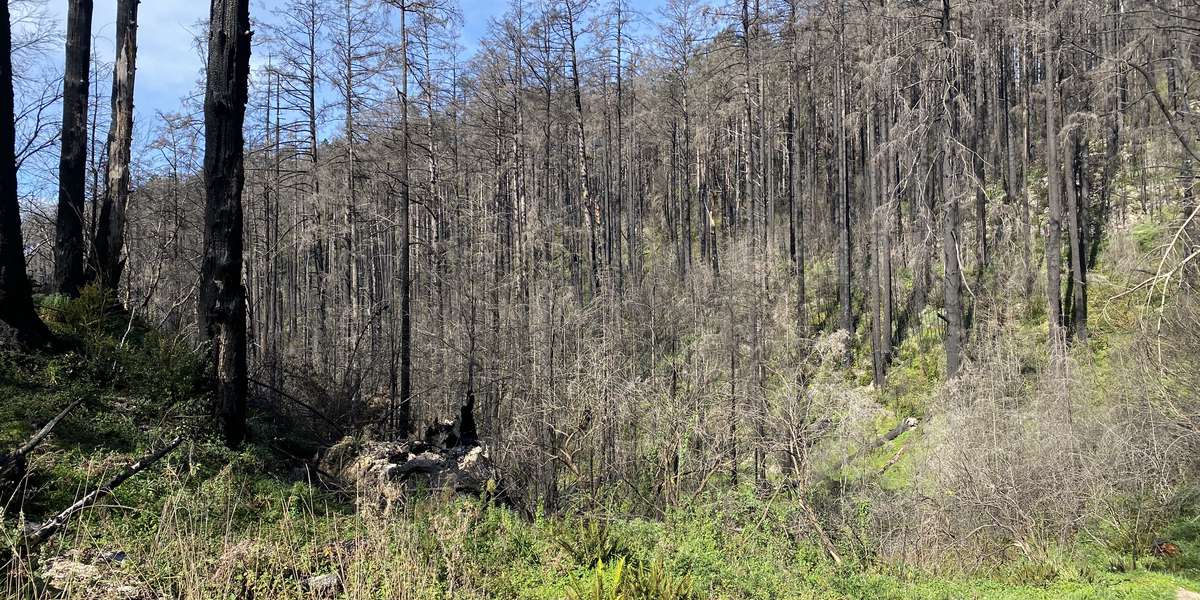 In hiking or riding to this photopoint, you may notice that you’re many miles away from the nearest road or building. Most of the Woodward Fire burned within the 33,373 acres of designated Wilderness within Point Reyes National Seashore. The Phillip Burton Wilderness was designated in 1976, to provide an extra layer of protection for the most remote areas of the seashore, to forever preserve its wild characteristics.

For many years, managers for public lands such as National Parks, National Forests and designated Wilderness Areas chose to suppress all wildland fires, fearing their destructive capacity and looking only at the losses rather than the gains. Left unburned for decades, many areas of California are now subject to extremely hot, fast-spreading fires that devastate natural and man-made environments, rather than the more frequent, low-heat fires that occurred regularly before Western settlement, and which were often set intentionally as part of indigenous land management practices to promote a healthy environment.

Thanks to years of research and wisdom shared by  California’s many indigenous peoples, public lands agencies now attempt to manage fires in a similar  way that is best for the ecosystem. While many Wilderness areas across the country choose not to suppress naturally (lightning) ignited fires, due to their many benefits, the Fire Management plan in Point Reyes states that all fires must be managed and controlled because of the Seashore’s relative proximity to nearby communities. It took a lot of work and many resources to control the blaze, but the outcomes of the Woodward Fire were largely positive! According to a report by National Park employees, “The Woodward Fire burned with mixed severity across a matrix of coastal habitat types that have seldom burned in recent decades but are largely fire tolerant or fire adapted. The result of the return of fire as an ecological process to the Point Reyes landscape could be a mosaic of vegetation communities more heterogenous, resilient, and diverse than before.”