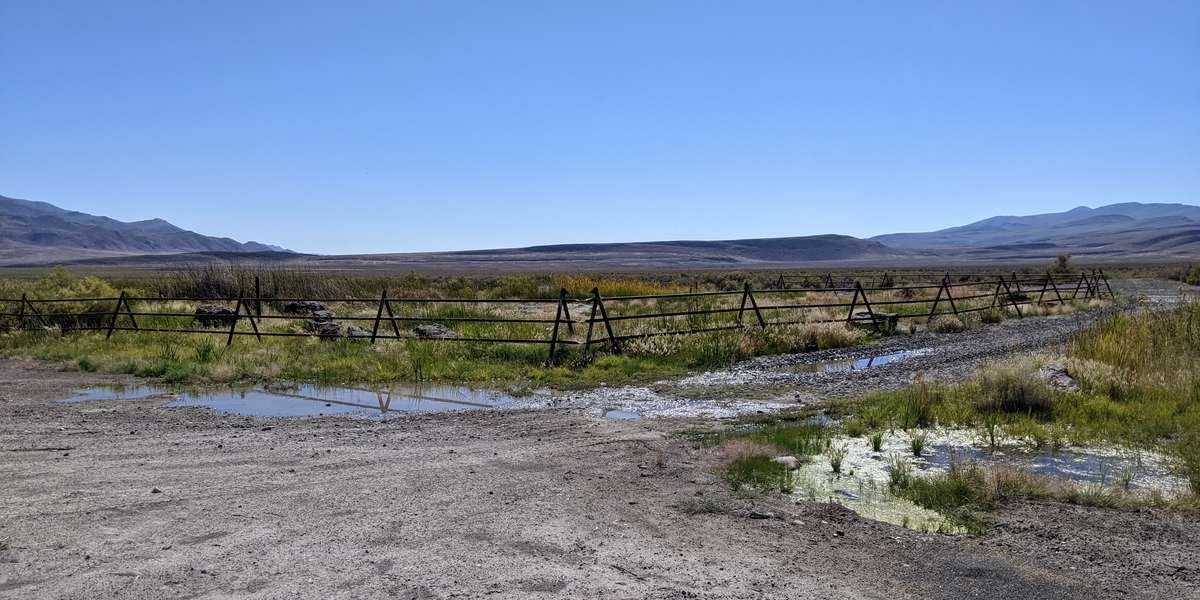 This section of the High Rock Lake Road (Route 2054) has flooded in the past from adjacent spring sources. Motorists travelling through the area have created new, unauthorized routes to avoid the flooded sections. The unauthorized routes have damaged habitat for the desert dace, sensitive springsnails, and sensitive plants.

In 2021, the Bureau of Land Management conducted road maintenance on the High Rock Lake Road to harden the water crossing to allow motorists to travel through the area without damaging sensitive habitat. At the 2021 National Public Lands Day, volunteers installed a temporary fence to prevent future resource damage. This photo station was established to measure the recovery of the unauthorized disturbance and once the vegetation has grown back, the fence will be removed.

The desert dace (Eremichthys acros) is a federally protected fish only found within the Soldier Meadows area. It grows to approximately two inches in length and has the highest temperature tolerance of any minnow in western North America, occupying habitats up to 104⁰F. This species was first taxonomically recorded in the 1940s. In 1985, the desert dace was listed as a threatened species under the Endangered Species Act partially due to concerns regarding invasive fish species, habitat modification, and recreational use of hot springs. Today, many Federal and State agencies are working together to aid in the recovery of this rare desert fish. Actions to help protect the species and its habitat have included installing fish barriers to prevent invasive fish species from preying on the small minnow, establishing camping sites to be a minimum of 300 feet from critical habitat, and designating hot spring pools for the public to recreate in to prevent unauthorized pools from being constructed. Please help protect the desert dace and its habitat by staying on existing routes, camping in designated areas, and practicing Leave No Trace principles.

Located in northwest Nevada is the vast Black Rock Desert-High Rock Canyon Emigrant Trails National Conservation Area (NCA), established by Congress in 2000 and administered by the Bureau of Land Management. Not only does the NCA contain fascinating cultural, archaeological, and paleontological traces of the past, but it also offers a rugged brand of recreation activities for today’s adventurers. What these million-plus acres lack in developed amenities, they offer in unique and challenging backcountry and wilderness opportunities. Visitors are encouraged to respect the land and other visitors by practicing Leave No Trace and Tread Lightly principles.